I have been on antibiotic treatment now for over 2 years.  The first six months I was on antibiotics, starting in the Spring 2010, I showed no improvement in my symptoms.  I didn't seem to feel worse or better so the decision was made to start a PICC line in my arm.  I didn't realize it at the time that I was going to have it for over a year.  Although it was a slow process, I gradually started feeling better and better with the IV antibiotic treatment....It only took a year and a half to say that with confidence!!!

Early on in treatment (about the time I got the PICC line) my husband and I thought we would make a box and put in every pill box, every IV syringe I had to use and see how much medication it would take before I started feeling better.  The box turned into a plastic crate and spilled into another crate.  I wanted to just visually see how much medication was needed to get me JUST on the road to recovery.   The picture below shows just how much it has taken (although I was originally told just two week of antibiotics would do it!)  It is mind blowing! 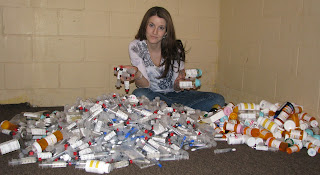 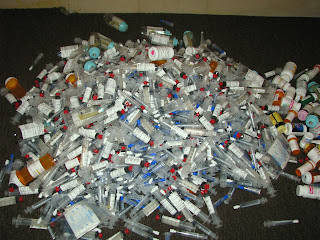 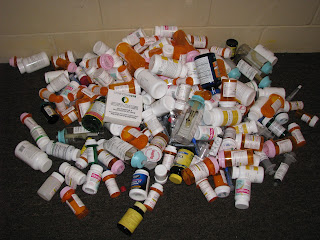