In January 2010, when I got the diagnosis that I had Lyme Disease,  Jake was 5 months old & Tristan was 2 1/2 yrs old.  This was about 6 months after Tristan's diagnosis of Autism.  We decided I should start seeing a Lyme Literate doctor.  Before going to see that doctor we got both my boys and husband, Mason, tested for Lyme Disease.  We got the results that all three were negative and felt such relief.  Meanwhile I finally got in to see this doctor.  We discussed all my very strange symptoms that had been going on for many years and when I got in the car wreck it brought the disease out of dormancy in my body.  The doctor said that if I did indeed have this illness before becoming pregnant that there was over an 80% chance both boys had it as well.  Also the standard testing is much more inaccurate than we were aware of. (I will go into that later)  We decided to get them retested through IGenex Lab out of California that not only tells you how many different strands of the disease you have, but exactly how strongly positive you are for them, since Lyme Disease is a very slow growing disease.  After three agonizing weeks we found out that Tristan was positive for six strands of the disease (considered a very positive test) and Jake was only positive for two (but very minimally infected).  We made the tough decision at that point to start both of the boys on antibiotic/probiotic therapy.  One fact I'd like to state is that Jake was only 5 months old and never in his life had gone into the woods and was barely ever outdoors at that point. 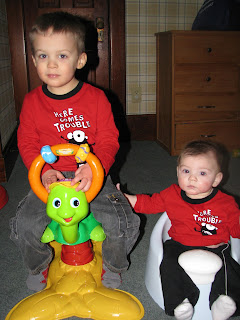 That was in March 2010.  We feel so blessed with Jake as he ended up only being on antibiotics for three months and was retested and was considered negative.  I wish the same could be said about Tristan, but his story is a very different, yet interesting one....

Beginning in March 2010, I started my long journey of antibiotic therapy along with other therapies along the way.  I do not know when I was infected with Lyme Disease.  I don't recall ever being bitten by a tick.  But along with Lyme, I was also infected with three different co-infections that added many detrimental symptoms, issues, and complications to my recovery.

I was on oral antibiotics for 6 months and still showed no progress in my physical recovery from the disease.  There is no way to measure your recovery.  You can only base it on your physical/mental condition improving.  At that point the decision was made to start me on more intensive therapy.  I had a permanent PICC line placed in my arm.  The day I had it placed, I had my first and worst HERX reaction that lasted for a few days.  (A HERX reaction is a feeling of all your physical symptoms getting much worse. This is a sign the antibiotics are killing off the disease and the therapy is working)  I ended up having the PICC line in for over one year.  It was a few months before I had it removed that I FINALLY started to feel better, physically.  My energy was much higher, the intense pains in my back were better, my neck pains where drastically better and my bouts of arthritic issues with my hands and feet were still there but lightening up...I finally felt, for the first time, I was on the road to recovery!!!!  That was after a total of TWO YEARS on antibiotics!!!! 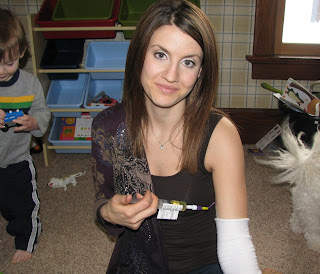